Beacon Pharmaceuticals, the local pioneer of oncology product manufacturing, may export $5 million worth of pharmaceuticals to Syria by December this year — a huge development for the local pharma industry.

The shipment will make Syria the single largest export destination for Bangladeshi pharmaceuticals.

“We will get registration from the government of Syria to export drugs by June,” said Md Ebadul Karim, managing director of Beacon Pharmaceuticals. 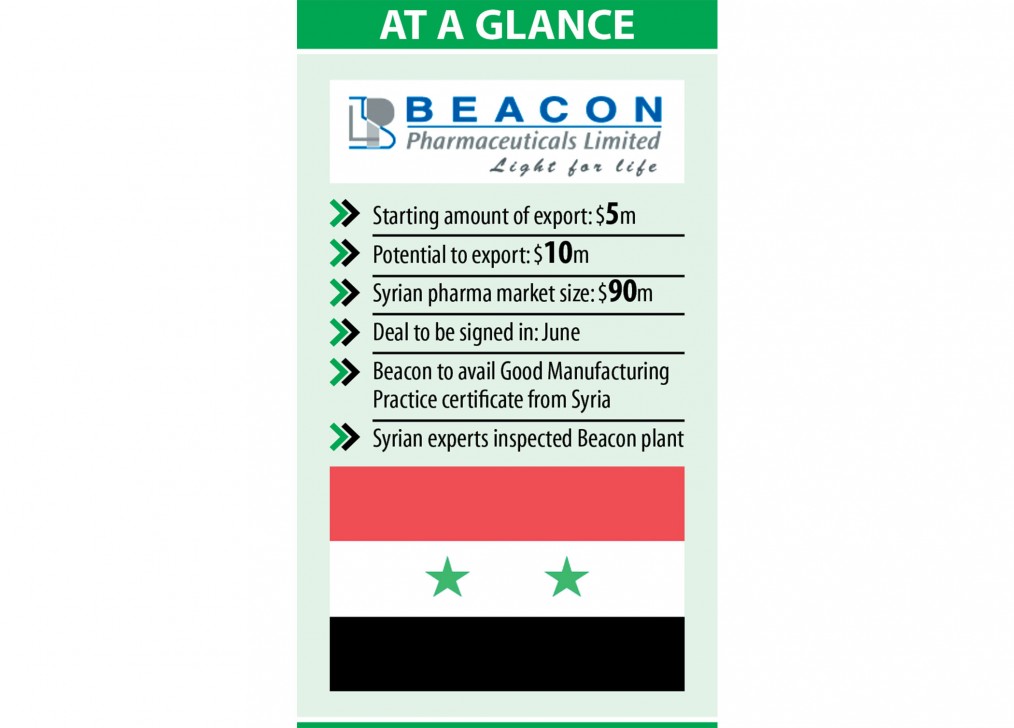 “We are also in the process of availing a certificate of Good Manufacturing Practice (GMP) from the Ministry of Health (MoH) of Syria,” he added.

The company will export oncology, general and cephalosporin drugs to Syria, according to the managing director.

Karim also said it is a proud moment for the country as the international community’s confidence on made in Bangladesh pharmaceuticals products has grown.

Sri Lanka is currently the top destination of drug shipments for Bangladesh with $4.7 million in FY 2019-20 followed by Kenya with $4.2 million.

The other major export destinations are Myanmar ($1.3 million), Nepal ($0.8 million), Afghanistan ($0.7 million), and the US ($0.6 million), data from the Export Promotion Bureau shows.

The local pharmaceuticals sector earned $135.79 million from exports during the last fiscal year, when shipments witnessed a 4.49 per cent year-on-year growth.

Earlier, a technical team of the government of Syria inspected Beacon Pharmaceutical’s plant on March 8. They expressed all-round satisfaction on the company’s overall operations in manufacturing drugs by maintaining the GMP.

With a market size of around $90 million Syria has become a market of choice for Bangladeshi pharmaceutical manufacturers.

“We have the potential to increase exports to $10 million within one year by grabbing around 12 per cent of the pharmaceuticals market in Syria,” Alam said.

Beacon will sign a deal with Syrian suppliers who will supply products to the country’s hospitals by next June.

Alam said they will make an announcement to the capital market in this regard after completing all official formalities.

He also said it was a thing of pride for the country that Beacon will soon make the single highest export of pharmaceutical products.

“This order proves that Bangladeshi pharmaceuticals has achieved quality and is winning over the global market,” Shafiuzzaman said.

According to him, the local pharmaceutical sector is capable of manufacturing any kind of high-end drug.

An official of the Directorate General of Drug Administration (DGDA) said they are aware of Beacon’s export to Syria and the company is capable of providing quality products.

Aside from Beacon, a number local drug makers have adopted modern technology and infrastructure with skilled manpower.

“The DGDA is ready to help the pharmaceutical companies secure export permission certificates within 25 hours of application,” he added.

About the Author: BPL